The WTO was born out of negotiations, and everything the WTO does is the result of negotiations. The bulk of the WTO’s current work comes from the 1986–94 negotiations called the Uruguay Round and earlier negotiations under the General Agreement on Tariffs and Trade (GATT). The WTO is currently the host to new negotiations, under the ‘Doha Development Agenda’ launched in 2001. Where countries have faced trade barriers and wanted them lowered, the negotiations have helped to open markets for trade. But the WTO is not just about opening markets, and in some circumstances its rules support maintaining trade barriers — for example, to protect consumers or prevent the spread of disease.

At its heart are the WTO agreements, negotiated and signed by the bulk of the world’s trading nations. These documents provide the legal ground rules for international commerce. They are essentially contracts, binding governments to keep their trade policies within agreed limits. Although negotiated and signed by governments, the goal is to help producers of goods and services, exporters, and importers conduct their business, while allowing governments to meet social and environmental objectives.

The system’s overriding purpose is to help trade flow as freely as possible — so long as there are no undesirable side effects — because this is important for economic development and well-being. That partly means removing obstacles. It also means ensuring that individuals, companies and governments know what the trade rules are around the world, and giving them the confidence that there will be no sudden changes of policy. In other words, the rules have to be ‘transparent’ and predictable. Trade relations often involve conflicting interests. Agreements, including those painstakingly negotiated in the WTO system, often need interpreting. The most harmonious way to settle these differences is through some neutral procedure based on an agreed legal foundation.

That is the purpose behind the dispute settlement process written into the WTO agreements. While the WTO is driven by its member states, it could not function without its Secretariat to coordinate the activities. The Secretariat employs over 600 staff, and its experts — lawyers, economists, statisticians and communications experts — assist WTO members on a daily basis to ensure, among other things, that negotiations progress smoothly, and that the rules of international trade are correctly applied and enforced. 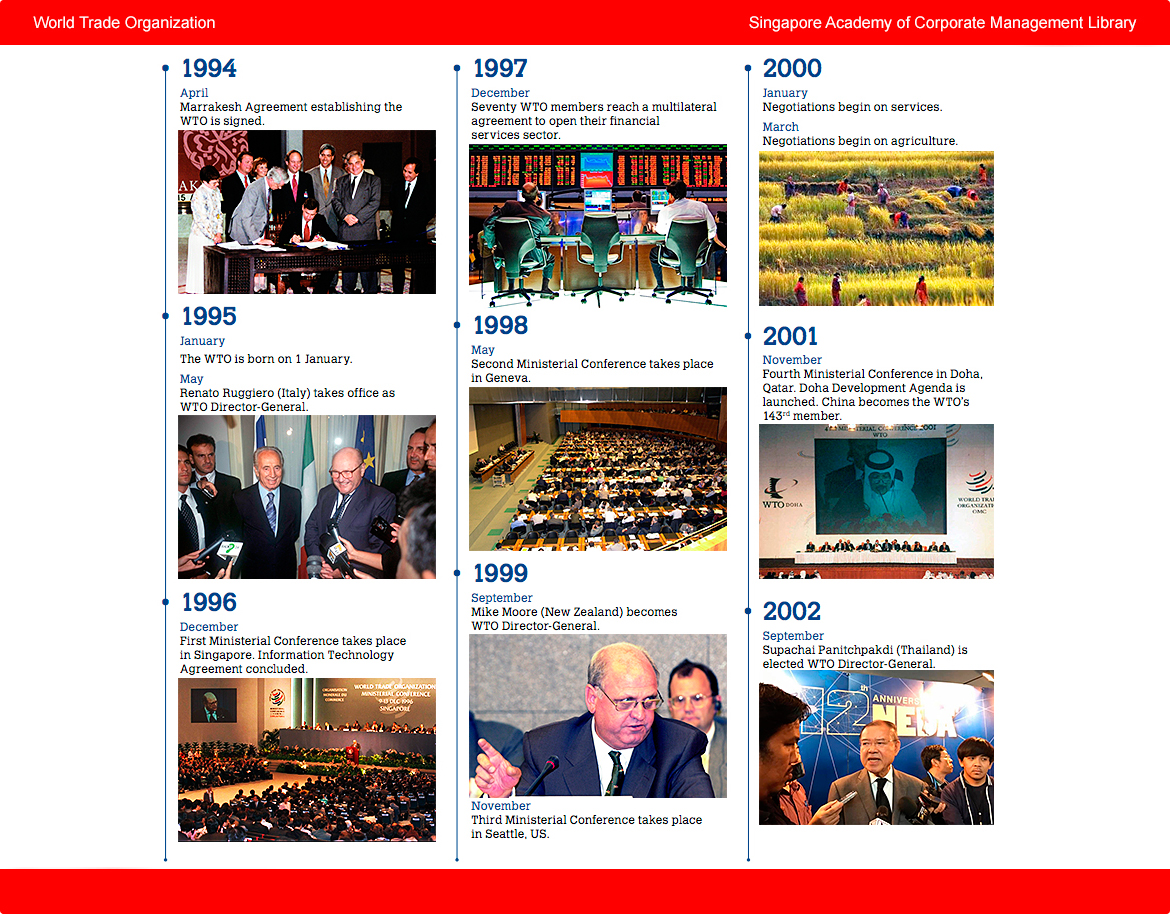 The WTO agreements cover goods, services and intellectual property. They spell out the principles of liberalization, and the permitted exceptions. They include individual countries’ commitments to lower customs tariffs and other trade barriers, and to open and keep open services markets. They set procedures for settling disputes. These agreements are not static; they are renegotiated from time to time and new agreements can be added to the package. Many are now being negotiated under the Doha Development Agenda, launched by WTO trade ministers in Doha, Qatar, in November 2001.

WTO agreements require governments to make their trade policies transparent by notifying the WTO about laws in force and measures adopted. Various WTO councils and committees seek to ensure that these requirements are being followed and that WTO agreements are being properly implemented. All WTO members must undergo periodic scrutiny of their trade policies and practices, each review containing reports by the country concerned and the WTO Secretariat.

The WTO’s procedure for resolving trade quarrels under the Dispute Settlement Understanding is vital for enforcing the rules and therefore for ensuring that trade flows smoothly. Countries bring disputes to the WTO if they think their rights under the agreements are being infringed. Judgements by specially appointed independent experts are based on interpretations of the agreements and individual countries’ commitments.

The WTO maintains regular dialogue with non-governmental organizations, parliamentarians, other international organizations, the media and the general public on various aspects of the WTO and the ongoing Doha negotiations, with the aim of enhancing cooperation and increasing awareness of WTO activities.

Lowering trade barriers is one of the most obvious ways of encouraging trade; these barriers include customs duties (or tariffs) and measures such as import bans or quotas that restrict quantities selectively.

Foreign companies, investors and governments should be confident that trade barriers should not be raised arbitrarily. With stability and predictability, investment is encouraged, jobs are created and consumers can fully enjoy the benefits of competition — choice and lower prices.

Discouraging ‘unfair’ practices, such as export subsidies and dumping products at below cost to gain market share; the issues are complex, and the rules try to establish what is fair or unfair, and how governments can respond, in particular by charging additional import duties calculated to compensate for damage caused by unfair trade.

Giving them more time to adjust, greater flexibility and special privileges; over three-quarters of WTO members are developing countries and countries in transition to market economies. The WTO agreements give them transition periods to adjust to the more unfamiliar and, perhaps, difficult WTO provisions.

The WTO’s agreements permit members to take measures to protect not only the environment but also public health, animal health and plant health. However, these measures must be applied in the same way to both national and foreign businesses. In other words, members must not use environmental protection measures as a means of disguising protectionist policies. The WTO provides a forum for negotiating agreements aimed at reducing obstacles to international trade and ensuring a level playing field for all, thus contributing to economic growth and development. The WTO also provides a legal and institutional framework for the implementation and monitoring of these agreements, as well as for settling disputes arising from their interpretation and application. The current body of trade agreements comprising the WTO consists of 16 different multilateral agreements (to which all WTO members are parties) and two different plurilateral agreements (to which only some WTO members are parties). 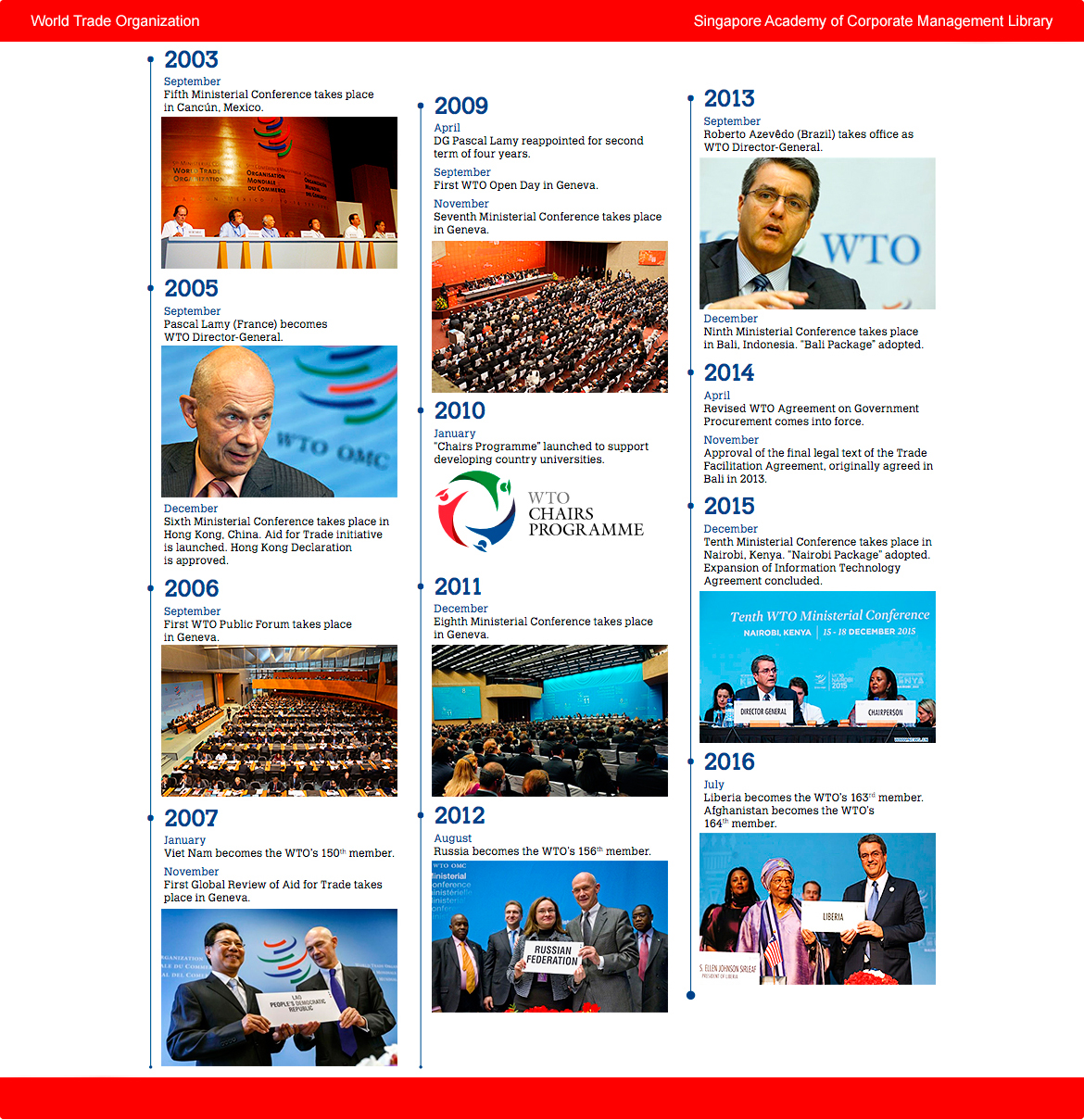 Over the past 60 years, the WTO, which was established in 1995, and its predecessor organization the GATT have helped to create a strong and prosperous international trading system, thereby contributing to unprecedented global economic growth. The WTO currently has 164 members, of which 117 are developing countries or separate customs territories. WTO activities are supported by a Secretariat of some 700 staff, led by the WTO Director-General. The Secretariat is located in Geneva, Switzerland, and has an annual budget of approximately CHF 200 million ($180 million, €130 million). The three official languages of the WTO are English, French and Spanish.

Decisions in the WTO are generally taken by consensus of the entire membership. The highest institutional body is the Ministerial Conference, which meets roughly every two years. A General Council conducts the organization's business in the intervals between Ministerial Conferences. Both of these bodies comprise all members. Specialised subsidiary bodies (Councils, Committees, Sub-committees), also comprising all members, administer and monitor the implementation by members of the various WTO agreements.

The WTO's founding and guiding principles remain the pursuit of open borders, the guarantee of most-favoured-nation principle and non-discriminatory treatment by and among members, and a commitment to transparency in the conduct of its activities. The opening of national markets to international trade, with justifiable exceptions or with adequate flexibilities, will encourage and contribute to sustainable development, raise people's welfare, reduce poverty, and foster peace and stability. At the same time, such market opening must be accompanied by sound domestic and international policies that contribute to economic growth and development according to each member's needs and aspirations.

Procurement at the WTO

The WTO Procurement Section is responsible for obtaining, in a timely and cost-effective manner, goods and services which meet the needs of the organization. These goods and services include, among others, informatics software and hardware, security products and services, reprographic and publishing equipment and material, various consulting services, as well as goods and services related to the functioning of the WTO buildings in Geneva.

Throughout the entire procurement process, WTO applies the following principles:

Suppliers interested in business opportunities with the WTO are invited to consult our tenders published on the United Nations Global Marketplace (UNGM). The WTO encourages potential vendor to register at the basic level through the UNGM. The system provides registered companies with secure access to information enabling them to participate in WTO tenders such as Expression of Interest (EOI), Request for Quotation (RFQ), Invitation to Bid (ITB) and Request for Proposal (RFP).

The WTO applies a "zero tolerance" policy to the staff involved in the procurement activities and expects suppliers not to offer any type of gift, favor or hospitality.

The WTO and other organizations